Work in groups. Draw an alien, think of a name for him / her and design his / her clothes. 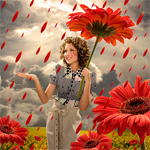 Here is our alien. His name is Bobo. If you pay attention at the picture you'll see what he looks like. Bobo wears pink comfortable jumper and checkered yellow-and-blue trousers. In my opinion, they suit to Bobo. He may be a stylish alien. He has a large head which must prove his wisdom and intellect. His eyes are kind. The number of fingers that his alien species has is three. So he has three fingers of each hand. He's a friendly guy. Be acquainted with Bobo! Let you do that!

1) As soon as you are ready? I will drive you home
2) If you will finish your work? we will go to the theatre
3)She will forget about it if we do not remind her
4) If we won't find the money, we will call the police
5) What will she do if she will miss the train?

пупык / 12 нояб. 2014 г., 2:43:52
помогите пожалуйста с заданием Work in groups of three.Student A You are Steve.Student B You are Mrs Snell.Student C You are another neighbour. You

haveinvited them to your flat for coffee.Continue the conversation below. Talk about these -things.• Steve's job • Steve's sister • the partyNeighbour Do you two know each other?Steve Well, we met a few days ago.Mrs Snell But we didn't introduce ourselves. I'm Mrs SnellSteve Pleased to meet you.Neighbour Steve works in advertising, you know ...What do you think?• What do you understand by the words 'generation gap'?• Write down three things that young people think aboutolder people and three things that older people thinkabout young people. In groups, compare ideas.

treatment to different animals. I also deal with the park's visitors and answer their
questions. I have always been keen on working with animals since I was a little
girl. I've always had a way with them. There was no other route for me. I worked hard to
get a Zoology degree. I started to work (4) for the company during college. After
graduating I applied again and was lucky enough to get a position in the animal nursery.
I have worked in this area ever since.
Of course I dream of the time when the babies will grow up and go on show
to the public. There is no better moment in a job than when you walk through
the park and see the babies you cared for and fed because their mum couldn't.
If you are interested in becoming an animal nurse, go to college and gather
as much knowledge on animals as you can. Volunteer at vet clinics and zoos. Animals
can't tell you what they feel and you have to be good at understanding their
needs and habits.
Most of all, if you are looking for a lot of money FORGET IT!!! Do the job for
the love of animals, love for the environment, and a desire to share your knowledge
with others.

teacher, plumber and so on. The most dedicated career adviser could perhaps name a hundred. But there are over 500,000 jobs in existence to choose from! So if you want to do well, how can you decide the best way to make a living? Paul Hamilton takes a light-hearted look at some very ODD JOBS! King Alfonso XIII of Spain was going deaf so he employed an “Anthem Man”. His only job was to give a signal to the king when the national anthem was being played so that he would know when to stand up and when to sit down! If you cannot find a tuneless monarch to be your employer, the railways offer jobs of all sorts. In Japan, “Passanger Pushers” are employed full time by the railway companies in Tokyo. During the rush hour, when hundreds of people are trying to get on the metro, they do their best to squeeze everyone into the trains so that the doors will close properly. Another technological advance that led to the job creation on the railways was the invention of chewing gum in 1928. When they finished their gum, many passengers just dropped it on the floor of the stattion and management at New York’s Grand Central Station had to do something about it. In the end, they employed a professional gum remover who had a lot of work to do – he collected, on average, over three kilos of the sticky menace per day. I suppose you could say he got attached to his job! Escalators have provided inspiration for other rewarding careers. When the first moving staircase was installed at Harrods Department Store in London in 1898, it made many people scared. Shop assistants were put at the top of the escalator with instructions to give brandy and smelling salts to customers! And in 1911, whe Earls Court underground sattion installed its first escalators, many people were worried about their safety. London Transport had a great idea; they employed a man with a wooden leg. His job was to walk up and down the escalators all day to show passengers how safe they were. In 1982, dozens of neighbours in a village in Berkshire made complaints about the smell from nearby sewage works. So twelve people were employed to sniff the air outside their homes to estimate the smell. The Amsterdam police have similarly specialised task force called the ‘grachtenvissers’. Their sole dutyis to help motorists whose cars have got stuck in canals! This trend toward specialisation has grown dramatically in the last few years but it is not an entirely recent phenomenon. In medieval Japanese armies, special soldiers did the gruesome jobs of counting up the numberof decapitated heads after each battles! In America, Miss Edith King was given an unusual job in the army. She was employed by the US War Department in 1905 with the task of finding soldiers who had run away from the army. She collected $50 for each deserter. Her only weapon was flirtation. If the runaway soldiers thought they were going to have a good time, they were making a big mistake – she led over five hundred into court. She must have a real charm!Being unemployed often makes people think of unique ways to make money. Take Jim Parker from Sacramento. Last year he got the sack from his job in a high-tech company and has found it impossible to get full-time work. In desperation, he became self-employed and is now trying hard to sell advertising space. If the price is right, he intends to tattoo an advert – on his forehead! He has already turned down an offer of $75,000.

the world. It has many faces and means different things to different people.
b) London is a city for all seasons, a city of theatres, shopping, entertainment and good food as well as being a city with an ancient history.
c) London is one of the biggest and most interesting cities in the world.
d) Each part of London has its own history and character.

5-9 класс английский язык ответов 1
Zzoloto / 29 июня 2014 г., 13:25:23
Think of jobs you are interested in or that might be suitable for you. Would you like to work with people, with PCs(personal computers), with

animals? List as many jobs as you can think of and report them to the class.